You’ll remember Frank Darabont from The Shawshank Redemption and The Green Mile, two films he wrote and directed before The Mist. Though it’s not in the same caliber as those two films (Shawshank is on my short list of best movies ever) they all share the distinction of being more-or-less faithful adaptations of Steven King stories.

The Mist is a monster story with a very simple premise: An impenetrable and mysterious mist rolls over a city, bringing with it strange creatures that threaten a group of strangers and half the cast of The Walking Dead as they cower inside a grocery store. 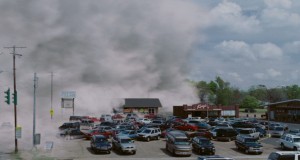 Now, Darabont is no stranger to horror. Uncredited, he rewrote a significant amount of Wes Craven’s original screenplay for Nightmare on Elm Street 3: The Dream Warriors, tightening it up and giving it much needed focus. More recently, he’s responsible to bringing The Walking Dead to life.

The Mist is as tightly plotted and focused as all his output, and the characters are surprisingly well-drawn for a movie with so many of them. Lots of recognizable faces round out the cast and everyone rises to the occasion. As usual, I won’t give away much detail here, only to say that you’ll definitely care who lives and who dies and find yourself rooting for some folks over others. 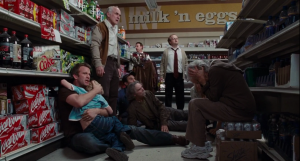 As is usually the case with these Trapped Strangers In Peril stories, the horrors outside barely hold a candle to the fighting and tension between the personalities inside. It doesn’t take long for a Lord of the Flies mentality to develop, and various factions begin separating to rally behind different leaders with their own particular takes on what is happening and needs to be done. I found all this 100% believable. Truly, the writing is excellent here.

But let’s not diminish the dangers outside. Though he clearly has the budget, Darabont adopts a a less-is-more approach with the monsters. We’re only allowed a good close look at the smallest creatures. They’re still deadly as hell, but we know they’re mere houseflies compared to the larger, more threatening creatures we can only glimpse in quick shadows through the impenetrable fog. As always, it’s an effective and terrifying approach.

Where are the creatures from? What caused this to happen? How can they possibly pull through this? And at what cost? By the end, the answers to those questions are incomplete but wholly satisfying. I highly recommend this movie.

Man, what a bleak ending – even bleaker than King’s original novella. I sat for a long while afterward, trying to consider the point Darabont was trying to make with his change.

In the end, I settled on two possibilities:

2) Darabont is making a quasi-political statement. Maybe that’s not his primary goal, but I saw some obvious parallels with the rise of the more militant and pushy faith-based movements and culture wars of Bush-era politics.

Inside the store, as one character pointed out, they already had all the food they could have wanted, medicine, and shelter from the elements. It didn’t always work out, but a little more organization and planning could have led to better defense from the creatures the occasionally broke through the glass. 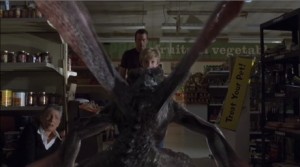 In the end, all they had to do was get along with each other and wait. The Mist would pass over as yet another temporary problem and the government would sweep through to clean up the mess it created.

Even if it’s a stretch to draw parallels to a particular time in politics, it does speak to the nature of how we deal with crisis as a society – our tendencies to deny, then overreact, then slip into a mode of permanently perceived peril where we forget that this, too, shall pass.

Meanwhile, we remain blind to our good fortune, all things considered. And every crisis, no matter how severe, eventually becomes another touchstone in human history, leaving only casualties in its wake – at least as many from our own cannibalism than any external forces.