I think I would’ve enjoyed The Ruins a lot more if I hadn’t read the book first.

This is another Suburban Americans Out Of Their Element tale in the same family as Deliverance and The Descent. Some young American tourists in Mexico team up with a newfound friend to investigate his brother’s disappearance while exploring a remote and uncharted Mayan ruin. Once they arrive, they plunge waist-deep into more than they bargained for. 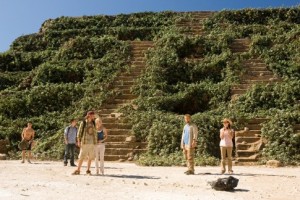 Now I’ll admit the novel was a bit strange. The whole concept is a bit tough to swallow, but it manages to work anyway in ways it shouldn’t – particularly as the more fantastical elements are counterbalanced by the human threat surrounding the structure. Regardless, I remember being utterly gripped by the book and its premise.

The movie takes a more pedestrian approach to the novel and focuses way too much on the gore. I really didn’t need to see…well, I’ll save you the spoilers. But I think simplifying the story and presenting it in a visual format somehow stripped it of some of its heart in ways that are not easy to define. 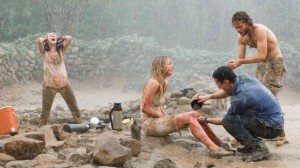 Maybe it’s all rushed through just a little too quickly. Maybe watching them safely cavort around the killer vines for most of the movie destroys much of its tension. Maybe it’s the undisciplined fascination the camera has with the grosser elements. In all, we ended up with an “okay” film that has already been forgotten, born from a somewhat legendary bestseller.

Still, what’s left is still a bit different from your typical monster movie, and for that it’s still fun to watch. I can’t recommend it over many of the other films I’ve seen this season, but it works as a sort of low-rent The Descent. But by all means, consider rewatching The Descent instead. 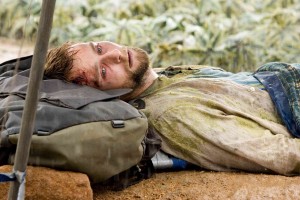