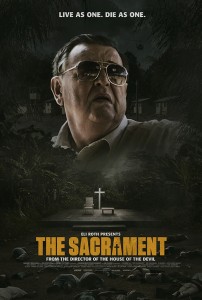 A guy’s sister gets wrapped up in a religious cult living in a compound in the South American jungle. He accepts her invitation to come visit and brings with him two video journalists to document the group. Almost immediately upon arrival, it becomes obvious that all is not 100% well in paradise.

I really, really, really, desperately want to love Ti West’s movies. He is so good at developing an atmosphere of dread in the most mundane of situations. I fell in love with The Innkeepers – the way it slowly builds a kind of suspense you can’t quite put your finger on, like when you wander into a dark room and feel like something just isn’t right. I feel like he’s really able to get into your subconscious to raise those feelings of dread where you can’t quite point a finger on why. 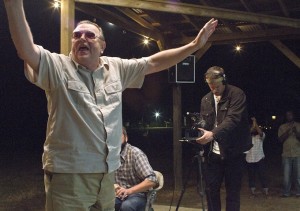 The Sacrament has at least that much in common with The Innkeepers and House of the Devil. Told as a found footage film (where the device more or less works when put in the hands of journalists doing their job), we follow the members from Vice TV (another nice touch) as they interview each person in this commune. They are all sweet people, folks of all ages, escaping a variety of difficulties back home and living the kind of life they always dreamed of as a big, happy family. And the whole time, you’re just waiting in anticipation for the other shoe to drop.

When it does, it drops so abruptly that the turning point is not terribly convincing. This is the same problem I had with House of the Devil: A big, skillful buildup that lacks a satisfying payoff. I was left with so many obviously unanswered “why?” questions that the documentary device just unraveled right in front of me, leaving me to watch actors executing a staged plot. It’s a shame, really. 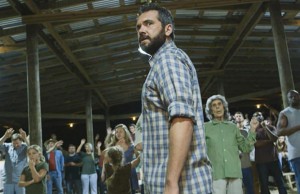 An especially superb performance by Gene Jones as the world-weary grandfatherly cult leader they all call Father really grounds this film. He came across as pretty much any Southern Baptist pastor I’ve ever met. Actually, the acting is great overall, even if it’s hard to understand how so many people can fit in so few cabins, and how they’re growing enough food to feed 167 people from a few tiny garden plots.

If you’re looking for something in this vein that’s a more supernatural, I’d suggest the more satisfying “Safe Haven” segment of V/H/S 2.

Now that you’ve seen the film….

Yes, I understand this is based on the true story of the Jamestown Massacre. Yes, I can see there are many parallels here to that actual event. So what? In this movie, I still cannot see how some of the members felt trapped. When the mother chillingly says, “Things aren’t as they appear,” what, exactly, is going on that’s so horrible? I kept waiting for the big reveal. I fully expected hints of these horrors to surface as they searched the compound’s office. I waited for Jim to tell them directly while Sam was tied (needlessly, I might add) to the chair. I waited for any indication that something – ANYTHING – remotely sinister was happening. What could all these sweet, well-meaning people be hiding behind their smiling, praying faces? Human sacrifice? Child molestation? Bingo on Saturdays?

Barring any explanation, it’s hard to see how a couple guys leaving on a helicopter after a rather benign interview and bewildering visit could destroy their way of life and jump the entire compound to DEFCON 1. Mass suicide seems a drastic overreaction to a handful of people wanting to go back home. What was Jim afraid they would reveal when they got back that would cause the rest of the world to turn on them?

In the absence of even a hint of an acceptable answer to any of these questions, how is one supposed to care? If we’re not allowed into the minds of these folks drinking their Flavor Aid, how can we connect and empathize with them like we’re supposed to? Without convincing motivations, it all starts to feel contrived.

Could this have been considered a “haunting” picture? It certainly could’ve, if it had felt more real. 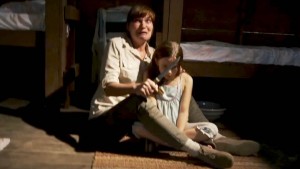