This was the third film we featured on our podcast, episode #3, way back in 2015. Craig recommended this one, having seen it before.

About 10 minutes into the film, I realized: Oh boy, we’re in for another found footage flick – and I left the triple-f behind years ago, convinced that the last drop of novelty has been wrung out of that schtick. Besides, there’s only so much shaky-cam swish-panning a guy’s stomach can take.

I’m happy to report that Creep managed to point the trope in some clever new directions. If you can manage to silence that inner voice constantly repeating, “Why the hell are they still filming this?” you’ll find an engaging story with an intriguing subject and more than a few twists and turns. I was on the edge of my seat the entire time, but it’s a slow, delicious burn. 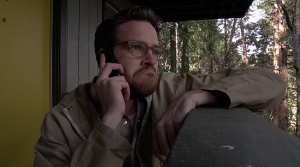 I agree with Craig that the best way to experience this is to go in knowing nothing, so I’ll stay sparse on details here above the fold. As always, the spoiler section is well-marked at the end of the article.

In a nutshell, Joseph has hired freelance-videographer Aaron to record a day in his life. He has his reasons, and it doesn’t take long for the day’s events to lead from quirky to strange to downright disturbing.

You’re never going to see another human being besides these two, so it helps that the acting is competent and believable, all the more remarkable considering the intensely personal, in-your-face nature of the cinematography. Aaron, played by director and co-writer Patrick Brice, is behind the camera most of the time, leaving the heavy lifting to the well-oiled chops of co-writer Mark Duplass, who you may recognize from TV (The League) or a few big name films like Safety Not Guaranteed or Zero Dark Thirty. Both stars nail the awkwardness of getting to know a stranger for the first time – perhaps even more than you wanted to. Despite a tight story, the filmmaker in me thinks there may have been a little bit of improv going on too. 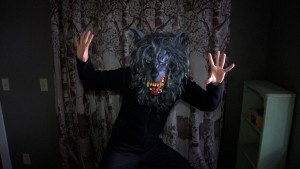 The filmmaker in me also mentally added up the film’s budget as the minutes passed. I came to roughly 35 bucks: a mask and a stuffed animal amidst some borrowed homes and apartments, stolen scenery, and a few household props. Kudos to the Brice-Duplass team for weaving a killer tale with a shoestring. Can you tell I’m a shade jealous here?

I feel a little bit better about myself by pointing out that Aaron is a crappier videographer-for-hire than your Uncle Harry. I seriously hope that was a stack of 5’s Joseph handed him for his shoddy framing and home movie filming style.

Setting all its inherent silliness aside, the found footage formula doesn’t seem so tired after all here, thanks to a few well-placed twists that toy with your expectations. My mind jumped and had to reset more than once. One built-in benefit to shooting everything on video through the eyes of the protagonists is the raw reality it gives to the proceedings, which the film plays up to full effect. You will even laugh (uncomfortably) throughout. One could easily argue the film is actually a dark dark comedy. The pacing felt right, and I couldn’t turn myself away, lest I miss something important. 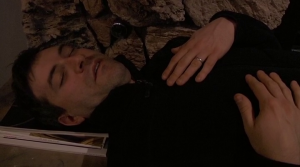 Honestly, there’s something a bit off about both these guys. Why does Aaron stick with Joseph for so long? The answer probably lies at least partly in Joseph’s brain tumor cover story. If you followed along as I did, you probably found your attitude bouncing between, “Is this guy dangerous?” and “Is this guy just a quirky sad sack, a victim of his own deteriorating mind?”

The point at which Joseph obviously hid his keys became the enough-is-enough moment for Aaron, and that felt about right to me. There’s that shot where Joseph stands above Aaron on the outside staircase, completely in shadow, that hammers the point home quite literally that we’re never going to be able to read this guy. Whether he’s a sociopath or simply anti-social is never absolutely clear, all the way up to the final scene in the park.

Speaking of which, that had to be the creepiest final scene in a movie in a long time and reveals yet another potential meaning behind the film’s title. It’s just as effective from the long build-up as from the tension that, even to the very end, had me asking myself: Is this just another one of Joseph’s jump-scares? Out in public, in the broad of daylight, so bold and sinister…almost rendering the coda scene an unnecessary tag-on. A perfectly chilling film to kick off the Halloween season. 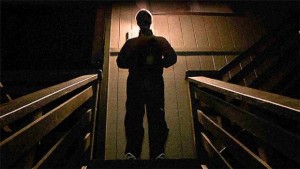