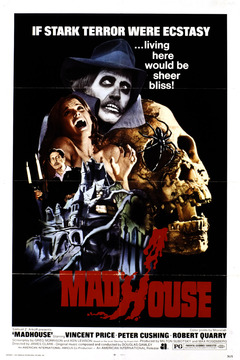 I can watch Vincent Price in anything. If you’re a fan of his unique acting style, you probably can too. I wish I had met the guy before he passed on.

In Madhouse, Price is starting to show his age and that is precisely the role he plays – aging Hollywood actor Peter Toomis, who is haunted by his previous fame as the Dr. Death character in a series of films and a chain of real-life murders he may or may not have unwittingly committed.

At a film wrap party many years prior, Toomis stumbled across the fresh corpse of an actress upstairs and went mad with the notion that he might have been the one who did it. After a decade in an asylum recovering from shock, he is coerced by his agent (Hammer Horror legend Peter Cushing) to resurrect his Dr. Death character for a new British television series. Then the murders start happening again.

Price plays two archetypes really well: Villain and the Tragic Victim in Torment. The script takes advantage of the circumstances – aging horror actors playing aging horror actors – to make some terrific in-jokes. Cushing’s character shows up to a Halloween party dressed as Dracula  – whose nemesis, Van Helsing, he famously played in a series of British horror films. Basil Rathbone makes a couple brief appearances, and I think it’s a deliberate choice that the detective from Scotland Yard chewed on a very Holmesian pipe.

As for Price, we are treated to multiple movies-within-movies from his Edgar Allen Poe series of American International pictures in the 60s. These are of course presented as Toomis’s old films as part of TV interviews, house parties, reminiscences, etc. Without doing any actual research, I identified The Pit and the Pendulum, The Raven, and The Masque of the Red Death, and The Premature Burial. Although they’re woven into the circumstances of the film, the tendency to linger on these sequences conveniently padded the running time, which comes in at a lean 90 minutes. 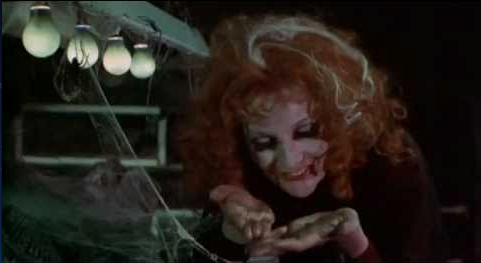 Price (as Toomis) delivers a particularly insightful monologue when he is asked by a TV interviewer why his movies are so popular.

They’re about a world that’s deep inside of us. A world of impulses and instincts that we’ve been taught to suppress. They’re impulses we don’t dare admit. Impulses we sometimes don’t know we have…Then there comes a time in between our sleeping and our waking that they whisper to us, they want to be set free. But we don’t set them free. I think maybe that’s why the pictures are successful. Because they do set them free.

I particularly relished that scene, as it sounds like something Price himself would be saying about his own career.

Other scenes were not so poignant. There is an absurd sequence involving the first victim’s parents blackmailing Toomis. They show up like quirky fools and finish each other’s sentences like Tweedle Dee and Tweedle Dum as the picture cantilevers and zooms in on them. It isn’t at all fitting with the rest of the film and as it gets weirder you wonder who decided it was a good idea to tack this unnecessary silliness onto the story – except to increase the body count.

I wish I could say I was on the edge of my seat with suspense, though there were some effectively tense moments. You know that someone is out there killing these people, and the movie of course leads you to believe it could either be Peter Toomis or one other character in particular. 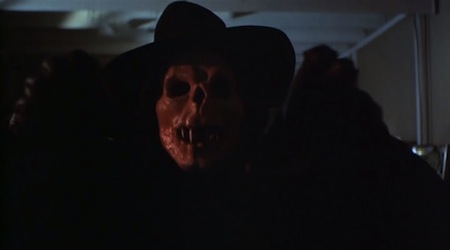 Typical of AI, the production values are low-budget and the filming is maybe a little too by-the-numbers. The few special effects aren’t impressive or convincing. Some are outright laughable. But there’s very little blood and most of the onscreen violence is either fleeting or happens off-screen, landing a PG rating that makes it fine for family viewing. Or in my case, sharing a rare horror film experience with a sensitive spouse.

But viewed more properly as a mystery and not a horror film, none of this will probably matter to you. In fact, if you’re familiar with Giallo films, you’ll recognize some clear parallels – a black-gloved murderer, killer POV shots, police investigation, and creative death scenes.

Although the outcome surprised me, it also stretched the boundaries of believability on a couple levels. Still, that’s not why we watch these movies. It was a fun, light romp, and anyway I could watch Vincent Price clipping his toenails for two hours. Movies like this take me back to the days of Saturday afternoon horror flicks on ABC or CBS when the morning cartoon run had finished. When I was a kid, I was so much easier to please.

It just struck me that Dr. Death would be a terrific Halloween costume. And cheap to put together. Hmm…

Now that you’ve seen it…

So instead of working so hard to kill Toomis and anyone associated with him, why not just write into the contract that, if he is ever unable to fulfill his role for any reason, then the part could would be played by his agent?

It would be much less risky to frame him for these murders, which he already suspects he may have committed. In that case, instead of killing the parents with the watch, pay them to go to the police with their evidence and put Toomis in jail.

Even easier still, Toomis seems on the edge of sanity himself, willing to believe he may in fact be committing these crimes. So just present him with some incontrovertible evidence that is the murderer – either the watch or something planted. I’m sure he could be cajoled into turning himself in or readmitting himself to the asylum.

Of course, we wouldn’t have a movie that way. But I’m just surprised that Toomis is so tormented by this possibility of his own guilt, yet he doesn’t do anything about it. Likewise, the police make little attempt to take him into custody, despite his strong connection to each of the victims and the crime.

Don’t forget, he did actually kill one person – the director of the tv show. That accident alone should’ve shut down the entire production and brought Toomis and the special effects guy into court for involuntary manslaughter. Instead, nobody seems phased by it, with the producer’s hilariously callous line, “I’m going to need to find myself a new director,” and the prop remains in the show – still without the simple modification to prevent the dumb thing from going all the way down to the bed.

Also, are we supposed to believe that Toomis came out of the film strip at the end in some supernatural way, or that he made it back to the house and hid behind the screen to wait for just the moment when his agent decided to watch the film? Wish that had gone down in a more believable way.