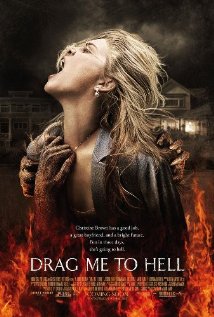 Whenever Sam Raimi directs a movie, I’ll be there. I stood proudly alongside him for Evil Dead, Army of Darkness, A Simple Plan, all the Spiderman movies, and even Darkman. Yes. Even Darkman.

Drag Me To Hell marks the return to his horror roots in many ways. It drips of his easily-recognizable blend of horror and humor, executed with his usual originality and inventiveness. You can tell the man loves his job.

Alison Lohman plays Chris Brown, a charmingly sweet loan officer with upward mobility on her mind when she refuses to extend terms to a vengeful gypsy woman – who returns the favor with a nasty curse. Supported by her boyfriend Clay (Justin “I’m a Mac” Long), she goes to extreme lengths to lift the curse before a demon can, ahem, drag her to hell in three days.

What makes this movie work is the incredible empathy you feel for Chris right from the beginning. As a formerly fat farm girl trying to make it in the big city, she’s succeeding through pure determination, but not the kind of determination that steps on or alienates everyone around her. She’s America’s sweetheart and Clay genuinely loves and cares for her, even when he doesn’t always believe or understand what she’s going through.

You love her for trying hard and doing everything right to get that promotion. You hate her rival for his obvious pandering to her boss, and you hate her boss for not seeing through that. Then when you realize her boss IS capable of seeing through all that, you root for her even more. Everyone is rooting for her. Her own damn cat is rooting for her.

If only there weren’t this pesky demon to contend with she could get on with her life and buy a nice house with a picket fence and have kids and bake pies for Republican fundraisers.

Though she stiffed the old lady, she wasn’t at all comfortable about doing it. You see the wheels turning as she contemplates that empty assistant manager’s desk, and the gypsy woman is not easy to like. Chris faces enough ethical decisions throughout the film to demonstrate she tends to take the unselfish path. In short, it’s the rare film where I really connected with her and was forced to contemplate what I would do in her situation (probably about the same).

The tragedy of her circumstances is amplified by the viciousness of the forces against her. It seems an unreasonable trade. It’s hard to feel sorry for the gypsy woman scorned, who relentlessly attacks her in the parking garage. The scales of justice are unevenly balanced. 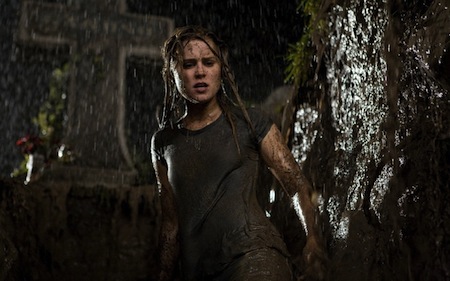 This is a smart film that works on so many levels and plays with your emotions in clever ways. No character turns out to be exactly who they first appear. The scriptwriters (Raimi and his brother, Ivan) made no cardboard cutouts here.

The director has plastered his signature style all over this one. With his cantilevered shots, strange voices and sound effects, and the way the camera deals with invisible forces, he long ago invented his own genre. Many tropes are ripped straight from the Evil Dead universe – floating demon-possessed people, excessive blood spurting that becomes laughable, people getting their faces covered in goop, a house coming alive, and just the general physical and mental abuse that his poor protagonist goes through. Only this time she’s a woman.

And it wouldn’t be Raimi without his dark brand of Three Stooges comedy. In the midst of the most intense sequences, I couldn’t help but laugh at some of the shenanigans. Somehow he long ago figured out how to slide in the goofball without pulling you out of the moment or the story. There’s a particularly funny bit with a goat that you won’t see coming. Or maybe you will.

Aside from a comic moment when a whole lot of blood spurts out someone’s nose and mouth, there’s no blood at all in this movie. Nobody gets hacked into pieces or stabbed/shot/dismembered onscreen. Although I saw the Unrated Director’s Cut version, I felt we were still pretty close to PG-13 territory, so this is a good flick to see with friends or a significant other. A great roller-coaster ride that is original and never dull. The only thing missing was Bruce Campbell.

Man, the ending really bummed me out. It was true to the film and I did see it coming, but I guess I was hoping against hope that I was wrong, or that some final turn of events would come into play.

Loved the closeup shot of Justin Long’s iPhone, along with all the other Apple products he’s seen using.

If you’re a Sam Raimi fan like me, be sure to check out the IMDB trivia page that lists all the in-jokes and references.