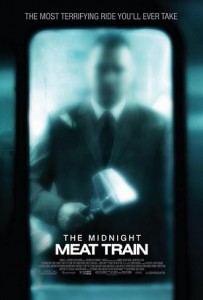 The Midnight Meat Train is a visceral, uncomfortable tale about a photographer, Leon, scouring the city for the perfect shot to impress a mover-and-shaker in the art world. In the process, he stumbles upon and becomes obsessed with a serial killer who literally butchers people on the subway using the tools of the trade.

I went into this film knowing nothing. If I had even bothered to look up the names of its creators, I might have foreseen where it was going. Instead, the desaturated, dreamlike imagery kept me guessing throughout: What is real and what is imagined? Is Leon coming unhinged? Where is all this meat ending up? 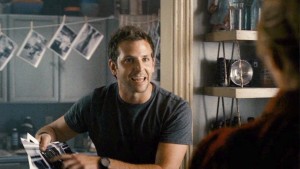 Bradley Cooper plays Leon as a curious and affable guy who loses his naiveté pretty darn quickly. Leslie Bibb is fantastic as his caring girlfriend, and Brooke Shields plays a hard-ass gallery director. I was also pleasantly surprised to see Ted Raimi – brother to Sam Raimi – as their mutual friend. As an actor, Ted is used to getting hung up and swung around a lot.

The street photography theme allows the film to play with the anonymity of city life, its inner workings, and the unnoticed significance of the little things that pass us by every day. Susan asks Leon to capture in freeze-frame those moments of high tension and reality in real life. Early on, an encounter with a gang harassing a woman in the subway begs the question of the hour: Can the photographer truly remain a passive, objective observer of his subject, and what might obligate him/her to step over to the other side of the camera? 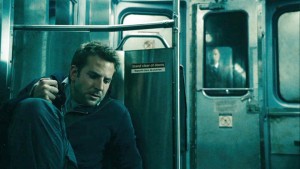 By making the film’s central villain an honest-to-god butcher, the tale presents a role reversal that forces us to contemplate, consciously or not, one of the uncomfortable truths behind dinner. I think much of the brutality of this film comes from twisting an ordinary, accepted profession into something ghastly. Many of us who aren’t card-carrying PETA members never stop to question or think about the hidden violence behind a hamburger or a juicy steak. We all know, of course, but we’d rather it remain hidden. And we’re happy to let someone else do the dirty work for us.

Unfortunately, due entirely to a change in studio head and office politics, The Midnight Meat Train’s North American theatrical release was relegated to – wait for it – dollar theaters across the country. After the inevitable poor box office, foreign markets were reluctant to pick it up, sending it straight to art house theaters and DVD. It’s a terrible thing to happen to such a well-made and stylish film, though the insane violence level will not be to everyone’s taste. 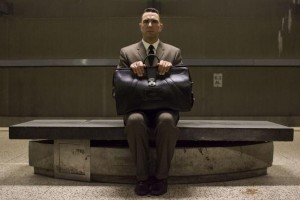 The Midnight Meat Train is based on a 1984 short story by Clive Barker, whose work generally revolves around hidden worlds and Lovecraftian underground creatures. The idea that a secret organization is tasked with sacrificing people to keep order between humanity and ancient creatures brings to mind Cabin in the Woods.

Though we’ve seen the whole hunted-becomes-the-hunter role reversal before in these kind of movies, I feel it works here better than most. Leon’s transformation seems complete by the end, as he proves himself capable of stooping to the level of monster. With everyone he loves in the world brutally destroyed, and the horrors of the subway butcher exposed, the renewed sense of purpose is convincing.

A bit different from the other movies I’ve seen so far this month, the violence doesn’t have an ounce of camp. Even though we get eyeballs knocked from their sockets and flying through the air, and see some action from the perspective of a severed head, there’s no dark humor behind it, which ends the movie just as grimly as it began.