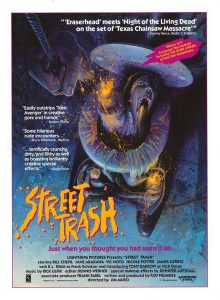 Roy Frumkes writes a screenplay with the express purpose to “democratically offend every group on the planet”. A man who would go on to be one of the most celebrated cameramen operators in Hollywood – as well as James Cameron’s go-to Steadicam operator – chooses it as his directorial debut. Loyal listener Colin recommends it to me and Craig to watch. Neither of us had heard of this film before.

Buoyed by the intriguing poster art and a quick glance at the accolades afforded it at Rotten Tomatoes, we settled in for a promising “hidden gem” of a film.

What could possibly go wrong?

This. This movie. Went terribly wrong. 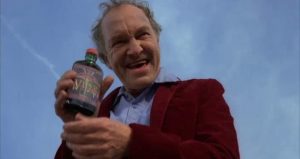 A liquor store owner in Bumtown uncovers a hidden stash of old, mysterious hooch called Viper and decides he could get at least a dollar a bottle. This brew, which causes anyone who drinks it to either explode or painfully melt into a neon-colored pile of 80’s goo, loosely ties together a series of loosely related and sometimes incomprehensible interactions between grubby, aimless people doing grubby, aimless things.

Craig and I agreed this was not a pleasant film to watch, and that’s not at all because of its graphic scenes of humans melting down like someone popped the Lisa Frank Crayola Set into the microwave. That alone should have been fun. 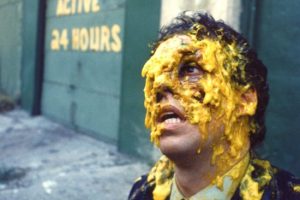 It’s partly because there simply is no plot to pull us through this offensive, ugly junk pile. The “story” drags on like my 7 month-old plays with his toys: He gets really focused on one thing for about 10 seconds before dropping it and picking up another, continuing like that for about 30 minutes until he’s tired and cranky but it’s gonna be another hour before the little turd finally gives up and just GO TO SLEEP ALREADY WILL YA FOR THE LOVE OF GOD?

I think in a pre-South Park era, when Tom Green was still in his teens and Jackasses didn’t have TV shows, this undoubtedly seemed like one of the most subversive, “punk” movies ever made. It does, indeed, offend women, homosexuals, Asians, African Americans, white people, old people, overweight people, homeless people, and its audience’s sensibilities, and I understand it rode to cult status on the back of that horse alone.

The problem is, we’ve been surrounded by a glut of juvenile, shock humor as deep as a stack of Adam Sandler DVDs for a good two decades. Dare I suggest that we’re at a point now when we’re a bit more DISCRIMINATING towards our low-brow comedy? We expect a little more sophistication in 2017, and Family Guy this ain’t. In a weird way, being clever takes the edge off, and these jokes are so on-the-nose and unfunny that they simply play as mean-spirited. The movie tries so hard to push all your buttons that two of the least-prudish guys on the planet – who, if you’ve listened to our podcast, you’ll know have pretty much seen it all – were rolling our eyes and checking our watches. 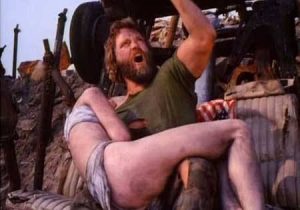 A dirty ringleader of a gang of dirty runaways living in the world’s most forgiving salvage yard is perpetually fawned over by a dirty female sex slave in granny panties and an oversized bra. They are bickering for unclear reasons with another dirty group of bums who seem nicer but are really no better people. For example, one of them – the guy who originally appeared to be the “hero” of the film – helps a rich woman vomiting in the alley by walking her back to his hideaway, taking advantage of her, then leaving her to be gangraped TO DEATH by the rest of the dirty gang before her discarded body is once again defiled by the horny, overweight owner of the junkyard named Frank. There’s a weird subplot involving the woman’s mob boss girlfriend, his doorman, and a hit man, which loosely overlaps with a strangely beefy police detective’s investigation into the melting deaths. Frank also tries to rape the dirty Mysterious Token Asian woman, who struggles “comically” under his overweight body to a Looney Tunes soundtrack. Later, a dog swings by and licks the stain off the crotch of his pants.

Mind you, all this is played for laughs. But mostly our eyes just got tired of looking at dirty, sweaty people for 90 minutes. And even the dirt makeup looked fake. It tries so hard to be funny and subversive that it fails in nearly every respect. In short: If you stripped a Troma movie of all its fun, you’d be left with this schlock.

Can we fault a movie for delivering on its promises? We’re pretty famous for digging out at least one or two shining gems to admire in the worst of low-budget clunkers. So, despite the fact that we both disliked this movie so much that we can’t even recommend it, I’ll give this a shot.

The best actor in the bunch: The doorman, played by James Lorintz, who I recognized immediately from Frankenhooker (a much better horror-comedy than this one). He’s the only guy in film with any sense of comic timing, and his deadpan delivery in that wonderful Brooklyn accent steals the three scenes he is in. He’s so fun to watch that I’m positive most of his lines did not come from the original script. 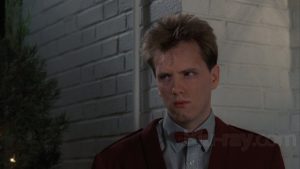 The cinematography in this movie is NOTICEABLY good. Like, so good that it calls attention to itself and screams out, “What the hell am I doing in this movie?” That’s not surprising, given director Jim Muro’s skills. Unfortunately, it only manages to make the movie marginally more watchable.

Also, I really enjoyed the special effects, in that low-budget, goopy and gooey sort of way. Craig wasn’t as fond, which I found a bit surprising, but there’s no accounting for Craig’s taste anyway. What a goober. 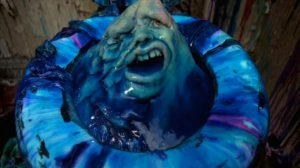 And I lied when I said we didn’t laugh once. I laughed exactly one time: When the heroine, in a short skirt, lept over the severed head of the villain, which is looking up at the time and manages one last grin of delight before its last breath. To me, that was the whole movie in a nutshell, and I felt I at least owed the movie some small credit for its investment in a complex, realistic-for-the-80s special effects puppet for that single gag. I’m sure it significantly surpassed their food coloring and marshmallow cream budget.

Nevertheless, we both remain puzzled by the fawning that this movie gets online. It’s even cited as one of the best of a micro-genre dubbed “melt movies”. The Stuff is one of those, and has been on my must-watch list for a while, but I hope to high heaven that it’s more enjoyable than this. Thank you, loyal listener Todd Brown, for suggesting the one movie we couldn’t even bring ourselves to talk about for an hour. I hope you enjoyed this written review in its stead. 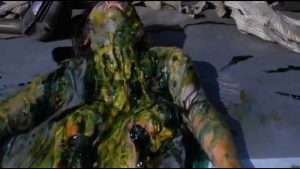