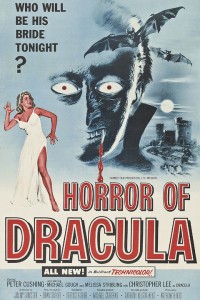 It’s impossible to resist comparing the two. Horror of Dracula begins with John Harker’s trip to the castle to kill the vampire and ends with a dramatic scene of Van Helsing attempting to do the same. While it follows the book a bit more closely than the Universal version (which is based on the popular play), it still takes tremendous liberties with the story and characters. 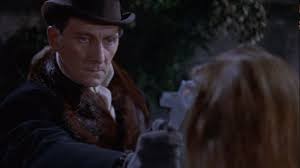 What it lacks in the gothic style and lavish set pieces of its black-and-white predecessor, it makes up with considerably more action – and that’s a good thing. Though still tame by today’s standards, the blood flows a little freer here. In his first scene as the transformed count, actor Christopher Lee springs forward from the shadows with crazy bloodshot eyes and snarling teeth, which are less sexy and more terrifying than Lugosi’s turn. But isn’t that more or less what you want anyway?

Both Lee and Peter Cushing (as Van Helsing) will notoriously continue to battle each other in a string of vampire films that ride on the success of this one. And why not? Both men possess a unique style and charisma onscreen, though none of these movies contain their best work. About 20 years later, Lee would eventually flee to the States to avoid being typecast – a fate Cushing seemed unable to escape. And let’s not forget that Lugosi did pretty much nothing of consequence after his turn as Dracula, so Lee ended up ahead of the pack by far, even up until his death a few years ago. 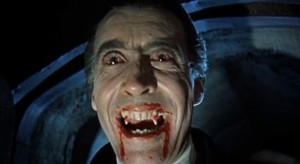 Universal and Hammer pretty much own this space, and I love each version for entirely different reasons. What sets Horror of Dracula apart is a more expansive story, more explicit action, less nuance, and color. You already know the story, and it has everything else you could want in a gothic vampire tale: scared townspeople, giant castle, fearless vampire hunter, stakes pounded into chests, not-so-subtle eroticism, dramatic sets, fog and fangs. 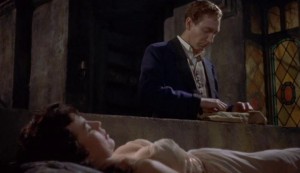