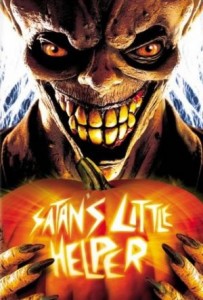 The idea came as a title: “Satan’s Little Helper.” Get it? It’s like Santa’s Little Helper, only EEEVIL. It just popped into my head one night while watching an old rerun of Dana Carvey’s church lady sketch on SNL.

The main character’s gonna be a dumb little kid, Alex, who cannot distinguish fact from fantasy. He doesn’t have any friends because he’s annoyingly obsessed with a video game called – get this – “Satan’s Little Helper,” which he plays on his PS Vita or whatever and also his computer. Don’t worry – we’ll find an 8 year-old who knows a little Flash and is proficient in Windows Paint to design some animations that look vaguely like a video game. It doesn’t have to look like a game someone would actually play. Remember, this kid’s an idiot.

Alex has a mom who’s just kooky enough to explain her son’s low IQ. I wonder if that Honey Bunny chick from Pulp Fiction is available? He’s also got a smoking hot sister, Jenna, who’s returning from college – and whom he loves almost as much as the Dark Lord. I’ll write an incest joke for his mom to hammer that point home. It’s really important, because we need to explain why he instantly hates, for no good reason at all, the boyfriend his sister brought home who’s otherwise pretty cool and friendly and wants to connect with this brat.

Oh, and let’s set this during Halloween so we can get half the cast in masks. That’ll save us some money on makeup effects and stuntmen, plus we can build our plot around mistaken-identities.

So the kid goes on a walk, sputtering about the boyfriend who has to stay in the family’s house for a while, and happens upon a guy dressed in a Satan mask next door setting up a very realistic halloween display on the porch. We’ll never know who he is because he won’t talk to the kid and he won’t take off his mask to spoil the mystery. He’ll just communicate everything in pantomime. That’ll be creepier anyway.

Obviously, Alex is going to just BEG to be this guy’s Little Helper. And instead of killing him, the killer will agree to let the kid tag around. Granted, Alex won’t actually be able to HELP with anything. He’ll just follow him around in a general show of solidarity, bearing witness to an increasingly implausible series of deaths, and enthusiastically show his support because Alex still believes this is all fake – a one-man show (with some neighbors who are really good at improv) put on solely for his amusement. Remember, this kid is all foam, no beer.

Jimmy still hasn’t returned my light kit, so let’s just shoot most of this during the day. When’s the Magic Hour again?

Through a series of events involving more masks and costumes, the boyfriend leaves the picture and the rest of the family decides to believe that Silent Satan is actually the boyfriend in disguise.

Don’t think that’ll fly for long? Hmm. Let’s just establish he’s a struggling method actor who really gets into his roles. No really, I think it’ll work. Plus, we can have a scene where Jenna makes out with him, thinking it’s really the boyfriend.

Crap. I just got off the phone with Katheryn Winnick and she doesn’t wanna show her boobies. Ok, so her character’s just gonna have to willingly make out awkwardly with a rubber mask for a while. Hey, that’s her call. I’ll find someone other boobs. Without a pair in there somewhere, the distributors will never pick it up.

I have some other vague ideas involving Drano, some thugs smashing a vacuum cleaner to pieces, lots of packing tape, and Jesus. As long as we call it a “dark comedy” instead of a straight horror film, who can tell where the winking-at-the-audience ends and the ineptitude begins?

Oh, and we HAVE to work in a scene where someone is threatened with a double fluted pastry cutter. Trust me: They’re gonna LOVE it. 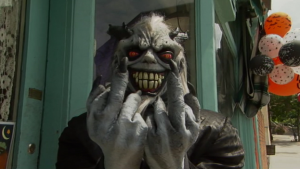