A guy murders a series of women, then dies somehow. Or is he really dead?

Well, not all of the acting is abysmal. The ugly, portly overweight actor at the center of the show more or less convincingly plays a serial killer with mommy issues. The women are all beautiful. Competent camerawork. The lighting was such that I could see what was happening on the screen. A grubby New York City indeed comes across as grubby. The blood was red and not, for example, green or yellow, as less accomplished craftsmen might have colored it.

Speaking of blood, there’s a lot to be spilled here, all close-up in loving detail. Special effects legend Tom Savini worked on the effects for this movie before immediately disassociating himself from it. He has a quick bit part as a man who gets his head blown off by a shotgun through the windshield of his car. It appears to be a convincing effect, keeping in mind I’ve never seen such a thing in real life. I think this is the real reason this film is considered a “cult classic” in some sad circles.

Ok, now that’s out of the way. What’s left is an abysmal film, bleak and depressing in every sense of those words, and not in an artistically-bleak-and-thoughtfully-depressing kind of way.

I know we’re all waxing poetic these days about grindhouse cinema, but nostalgia does not excuse a lack of style and artistry. What you’ll endure over the course of a long, drawn out 112 minutes – if you make it that far – is: Meet woman, watch woman die shortly thereafter.  There’s no suspense, as the film conditions you to expect this with predictable regularity. Its meager attempts at building moments of tension are false and hollow. It’s brutal and uncaring. It feels nothing. It makes no statement.

Then again, I guess it makes no promises either. If you’re craving nothing more or less than what the poster infers, then I guess you’ll get your two bits’ worth.

Hahah, we all know you haven’t seen the film. Nor will you ever. So I’ll just write few more things to round this out:

* I think somewhere deep inside the head of star-and-screenwriter Joe Spinell – who’s been in a respectable number of movies himself – there was a sort of deep quality to his character’s psychosis. He was really, really trying to channel something here, with the conversations with himself in the mirror and the fretting over mommy.

To me, it was incredibly lazy filmmaking. If you want to make a character crazy, you have wide latitude to do something original and different. Or you can rip off Norman Bates for your motivation, babble a bunch of disjointed nonsense into a mirror, then have the killer scalp his victims and nail them to the heads of mannequins he sleeps with. Ok…I’ll give you that last bit.

* It’s kind of fun to read the story behind the creation of that “mind blowing” effect in the car.

* Gene Siskel walked out of this movie about 30 minutes into it. I also found an interesting bit he did for television that features Maniac and says a bit about the general film landscape into which it was birthed: 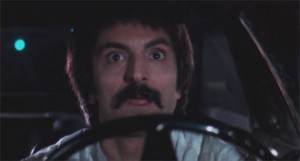 * This was remade in 2012 with Elijah Wood in the starring role. Without even seeing it, I can assume two things: 1) “Remake” is probably putting it kindly, and 2) by comparison, it can be nothing short of fantastic.