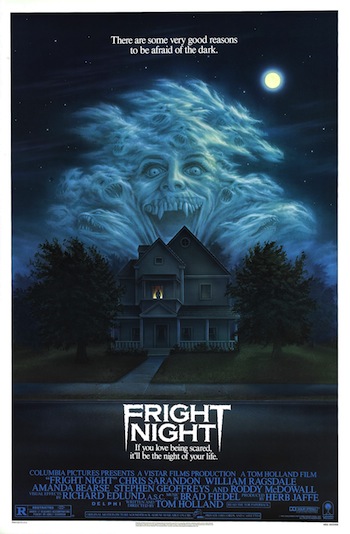 People my age usually remember Chris Sarandon from one of two movies: The Princess Bride or Fright Night.

Fright Night bills itself as a horror-comedy. I would argue that most American horror movies – particularly from the 80’s – have a comedic streak, however thin. April Fool’s Day, anyone? Night of the Creeps? Child’s Play (there’s Sarandon again, come to think of it)? While Freddy Krueger devolved into a lame comedian chuckling at his own jokes, even the mostly brutal and joyless Friday the 13th films built a sense of irony into deaths and characters.

Today’s “horror comedies” are unforgivably self-aware, carrying the torch of the Scream series of the 90’s. They wink and nod and wink again at their audiences, so I’ll warn you that if you’re popping in Fright Night expecting Shaun of the Dead, you’ll be taken aback. This is still a very scary film. 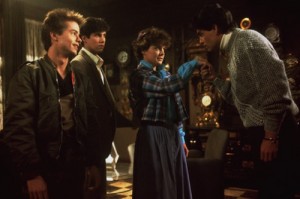 In short: Who could be disappointed in this movie? Jerry Danderidge (Chris Sarandon), the Prince Humperdink of the Dead, moves in next door to Charley Brewster, a teenager infatuated with shlock horror movies. He has a mousey girlfriend, Amy (Amanda Bearse), and a weird buddy at school nicknamed “Evil Ed” (Stephen Geoffreys).

One night, Charley catches sight of a few things through his window and finds good reason to believe his new neighbor is a vampire. The vampire knows he knows, thus the cat and mouse game begins. But as I said before, this ain’t The ‘Burbs.

I estimate I hadn’t seen this since 1989, and it was like a whole new experience. Mostly, I’m amazed at how well it holds up today. Aside from a heavy dose of flashback music, you’ll find little of that typical 80’s movie cheese. All the performances are terrific, but Roddy McDowell stands above the rest as a washed-up horror movie actor recruited for his “experience” vampire hunting. 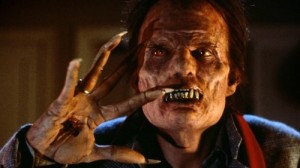 Charley is earnest yet so hopelessly outmatched that it’s – well, it’s terrifying. This was one of the first horror films I can remember to bring the baddies to the normally safe and serene suburbs. Add to that some WICKED practical makeup effects that will have you pining for the pre-CGI days. These are the blood-suckers that will keep you up at night.

It wouldn’t be a vampire tale without sex, and there’s plenty of borderline-R-rated necking to go around. Holland takes the sensuality very seriously, and both Sarandon and Bearse are up to the task.

Some films, you can just tell by the finished product that they had fun making it. These folks apparently enjoyed it so much that, when the studio released the DVD version with no special features, the original cast and crew got together to record two “pirate” audio commentaries you can download here. Arrrrr. 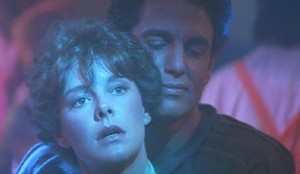 Seriously, do special effects get any better than this? Richard Edlund and his team did the special effects for Ghostbusters and Fright Night, back-to-back. The wolf transformation scene blows me away. As for all those fangs…anyone know a good vampire orthodontist? 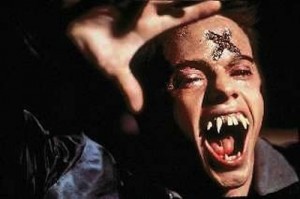