The wife of an American diplomat in Rome loses her baby in childbirth, but she doesn’t know that. Considering how distressed she would be, her husband decides to replace the child with a baby from the orphanage at the Catholic Church down the street who happened to be born that day – June 6th at 6pm. Get where this is going?

Boy, The Omen sure comes packaged for success. It’s a big budget studio pic, fast on the heels of Rosemary’s Baby and The Exorcist, and narrowly beats to the punch a slew of copycat devil movies. There’s director Richard Donner, responsible for Superman, The Goonies, Scrooged, and the Lethal Weapon series; composer Jerry Goldsmith; and the incomparable Gregory Peck as the father, Robert Thorn, all wrapped in the tried-and-true premise of the Antichrist in the form of a sweet, innocent child.

Creepy kid, this Satan incarnate. There’s no way they could screw this up. 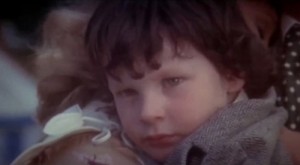 So why did I start nodding off around the middle of second act? I think it’s the script from David Seltzer, which begins promisingly enough with some incredibly creepy shenanigans, only to trail off to follow Robert and a photographer friend traipsing around the world to answer that nagging question: Is he or isn’t he? And if he is, what can he do about it?

In the meantime, we lose sight of young Damien altogether, almost forgetting he’s still around until the climactic final minutes. In all, the child has a total of about 15 minutes of screentime in this almost two hour movie. I counted only four scenes of real suspense – there are a few more shocking scenes, but they’re over as soon as they start. 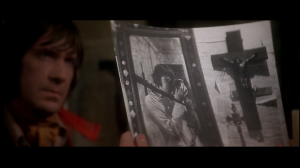 I thought altogether the film was shot in pedestrian fashion, closer to the style of Rosemary’s Baby than The Exorcist, and none of the panache (or gore, BTW) of the other exploitation films of its day. It doesn’t even scratch the surface of the obvious themes of parenthood and loving an adopted child. At the end of the day, I’d categorize this more as a suspense/adventure film than real horror.

And while we’re speculating what could’ve been, I would’ve like a little more insight into where Damien’s two protectors came from. You’d think the Antichrist could summon a larger posse.