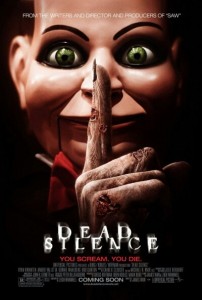 Of all the themes within horror, you don’t get enough of the possessed-ventriloquist-dummy. Those dolls are inherently creepy. They’re designed to look alive when operated, so they look like grinning corpses when sitting on a shelf. However, you can only get so much mileage from that fact, and that’s where Dead Silence begins to disappoint.

Jamie and his wife are about to settle down to an evening of takeout Chinese when a mysterious package arrives at the apartment door. Inside is a ventriloquist dummy and little else. She immediately recalls a sinister local legend about a long-dead but notorious ventriloquist from their hometown, and when Jamie returns with the food, she is dead. Convinced this has something to do with the doll, and under investigation by police detective Donnie Wahlberg for his wife’s murder, Jamie returns to his roots in the creepy New England town of Ravens Fair in search of answers. 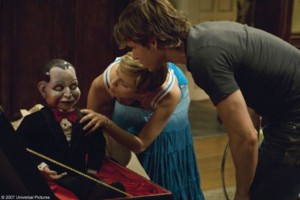 What isn’t improving is Whannell’s penchant for writing crappy dialogue, which also calls too much attention to itself. I could also cite Ryan Kwanten’s one-note performance as a factor in why I didn’t care too much about Jamie’s problems, but I think the issue lies more with the script than anything else. There are flashes of brilliance here though, and you can see how they have learned and refined these ideas for the much more effective The Conjuring and Insidious series that came later. 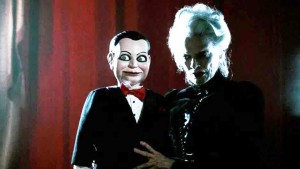 ALL THIS SAID, I don’t think Dead Silence is nearly as bad as some people make it out to be. I enjoyed it primarily because it’s throwback to classic Universal monster movies. That much is broadcast to you from the beginning when the classic black-and-white Universal pre-reel follows the modern version. In fact, leaning too heavily on atmosphere is largely responsible for the poor pacing, as we spend so much time watching Jamie tread slowly through creepy location after creepy location that the suspense just gets sucked out of each scene. Once we’ve established the town is creepy, the old theater is creepy, dolls are creepy, and the woods are creepy, one tends to stop getting creeped out as we revisit those same places over and over.

Nevertheless, it’s a good flick to have running in the background at a Halloween party where you might want something that delivers heavy on smoky atmosphere and a bit lower on the scares. 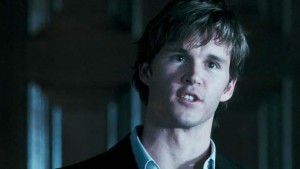 The legend of Mary Shaw has such a hold on this town that it’s hard to believe Ryan is so ignorant of it, considering he grew up in the place. And that twist ending? It was cool enough, but a little out there and completely unnecessary. I guess the Saw boys couldn’t resist. There’s a painfully drawn-out alternate ending on YouTube if you’re curious.