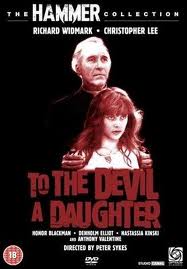 I’ve already said how much I love a good supernatural horror film about devil worshippers. Girls on stone altars, priests in black robes chanting and performing blood rituals – what else would the doctor order for a late October evening with Halloween fast approaching?

To The Devil…A Daughter did not fit the bill. It’s a lame and slow moving film, anti-climactic, plodding along from beginning to end. I barely got through it.

Catherine has the good fortune of being born to a Satanist couple who, for reasons hard to decipher, made a pact to give their daughter over to the arch-demon Astaroth on her 18th birthday with the help of a heretical priest, played by Christopher Lee. 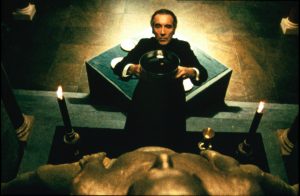 Now, Christopher Lee is the Vincent Price of British film. His voice, stature, stone-faced features and slightly craggy teeth combine into a visage that was born to play evil villains. He’s a staple actor in the Hammer horror films of the 70s, though he’s more often playing Dracula than devil worshipping priests. I’ll watch any movie he’s in just to see him perform.

But what we have here a small pile of experienced and respected actors who are nevertheless not given much to work with. It’s as if everyone knows exactly the kind of movie they’re in and is just trying to get through it. God bless them for giving it the old college try.

Lee’s priest spends most of the film crouching, kneeling, walking around and performing boring “satanic” rituals. 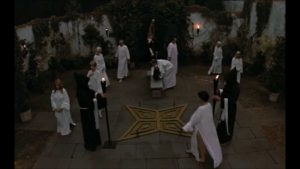 The terrific Richard Widmark is graced with some truly awkward scenes and dumb lines that he manages to navigate with as much grace as an actor of his caliber can muster. He plays an occult novelist John, who Henry entrusts to help rescue Catherine from the priest’s clutches without actually telling him what’s going on. It’s unclear how the occult author can infer so much from so little, but it doesn’t take him long to put two and two together.

The notion is that a ceremony will be performed and Astaroth will possess Catherine. The Dark Lord’s first mistake was relying on a pitifully small, low-key group of people to usher his spirit to earth. Christopher Lee goes at it almost entirely alone. In fact, this whole Astaroth cult seems lacking in membership. I counted five people – six if you include Catherine. At the very least they need a bake sale or something to raise awareness.

The first 30 minutes are boring and utterly confusing, until you realize that the present and past are being intertwined. Then it’s just boring. The rest of the movie bounces from scene to scene in a series of events that don’t make a lot of sense. Catherine knows exactly what she’s destined for and is perfectly happy about it. Henry’s regret manifests itself in curling up in a ball and generally being a weenie. And for a guy who seems deeply troubled by all this, John is doing remarkably little to keep Catherine from falling into the clutches of evil. Pretty much everyone is half-hearted in their motivations. 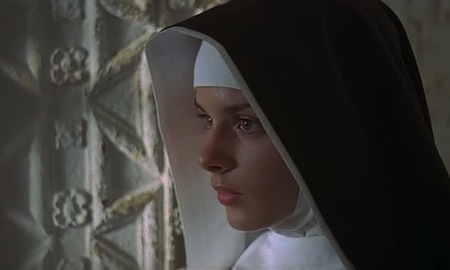 In an effort to liven the movie up a bit, everyone has a surreal vision or two. A guy spontaneously combusts. A woman drains herself of her blood. Another woman gets voluntarily tied down and banged by…a statue? Christopher Lee? Marcus Brody? I couldn’t even tell. A bloody little demon creature from who-knows-where crawls into yet another woman’s vagina. And there’s some brief full-frontal nudity by a 15 year old Nastasha Kinski. All this sounds much more interesting than it actually is.

Believe it or not, I’d been looking forward to watching this movie for many years. But I’m getting used to these kind of disappointments. I’ve seen much worse, but I can’t even recommend this movie as a curiosity. Instead, just read the title and daydream your own plot. If you have half an imagination, you’ll come up with something much better. 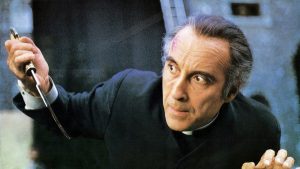 I love Hammer horror films, but it seems to be trying a little too hard here to fit in amongst the other psycho-sexual horror flicks of its time.

Drama needs high stakes and this movie just doesn’t deliver the goods. Should we even be worried that Astaroth could be coming to the Earth? It’s hard to say. There’s no real description of what the demon prince plans to accomplish when he’s here. Maybe the Dark Lord just wants to look around a bit and get a general feel for the place before heading off to DisneyWorld. And why is it taking him so long? It appears just about anyone could volunteer their newborn child to be a vessel for his return. There’s nothing special indicated about Catherine, her parents, or the timing of her birth that makes this an event that couldn’t be repeated if it fails.

And boy, it doesn’t take much to fail. Have you ever seen a more anticlimactic ending? It’s a battle of wits between the witless. A girl’s life hangs in precious balance. The hero is tempted. And it all comes down to a magic circle of blood. Father Michael says, “This magic circle protects me.” To which John replies, “Uh, no it doesn’t,” and proceeds to walk through, toss some spell at him or something, and carry Catherine out through a lot of wind. The priest has disappeared. A lame quote about light and darkness appears onscreen. Roll credits. Bash head against sofa cushions.

On the other hand, that demon hand-puppet would make great Halloween merch.