The less said about this unexpected gem of a story, the better. A journalist cajoles her office assistant and photographer friend to fly to Poland with her to investigate the story of missing hikers outside a traditional Polish town.

Needless to say, a lot of stuff goes down. And I will leave it at that.

There haven’t been enough Crazy Religious Cult movies to keep me truly happy since the craze peaked in the 70s and was pushed aside by the slashers. The Shrine brings an originality to the genre that kept me thinking about it well after the credits finished rolling.

Shot on a low-budget with a small cast and crew, this independent Canadian production drips of suspense at every turn. Though the first half of the movie may seem a bit pedestrian and cliche, the scares are nevertheless genuine and not at all cheap, and the gore and violence is affecting. And be warned there is quite a bit of that. 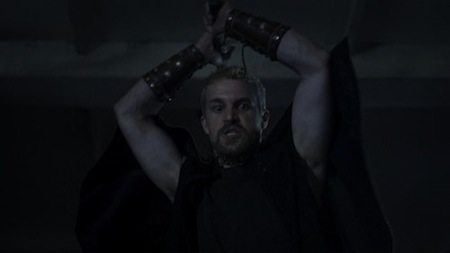 The acting is as believable as it gets. Maybe it’s the beer talking, but down to the smallest minor player – with no exceptions – I ended up caring about these characters, identifying with their plight, and was drawn into the story as though I were experiencing this tragic chain of events right along with them. You’ll be rewarded for sticking with them to the bitter end.

It’s not all roses, of course. Nothing ever is. Some Polish accents were better than others, and you don’t even have to know Polish to recognize that. Don’t expect subtitles, because that’s the whole point of putting you in the shoes of the protagonists. So stick with it and go with the context. The picture itself feels like it’s been shot through a sepia-toned filter for most of the movie, at times perhaps a little too much of the After Effects Glow filter, and the fog effect was good but not perfect. It had a bit of that made-for-tv look.

But who cares about such small potatoes? I deeply admire a horror flick that pulls its monsters out from under full moons, dark woods and dilapidated cabins and thrusts them into the light of day and ordinary situations. It makes the horror more visceral, probably because it speaks to our deepest insecurities – that, at times when we feel we are safe, we may actually be most vulnerable.

This one might contribute to a nightmare or two. I can think of no higher praise than that.

My recommendation to the horror fan is that you watch this on your next free evening. It’s a small investment of your time at about 90 minutes, but I think you’ll be pleasantly surprised.

Did you see what I just saw?

I freely admit that I did not see the reversal coming. It just takes your standard trope and flips it on its head, revealing the entire situation to be a tragedy of the worst kind. There are no winners in this one, but for once it’s not because evil won out in some cute and ironic ending.

So many times in a story, the major conceit is that everything would’ve been resolved early on if people had just been upfront and honest with each other from the beginning. What strikes me in this case is that, for once, that loophole is closed. Ask yourself: Even if the villagers could came right out and said, “Don’t wander into the fog because there’s a curse and you will die,” in perfect English, would that have stopped them? What proof could they possibly give that would have satisfied the crew’s suspicions? Those three were doomed the moment they decided to fly to Poland and set foot in that sad town.

I was also struck with how believable everyone’s decisions were. Aside from Sara initially wandering into the fog by herself, I couldn’t think of much that was particularly unmotivated, unbelievable or just plain stupid that any of these characters did. Nobody stayed when they should’ve run, all their investigation was cautious, and for once it was a damn good thing they did NOT stick together and plunge into the fog as a group. If I had been in their shoes, I’m not sure I would’ve done anything differently.

Part of the genius of the movie was to have a great deal of the dialogue in Polish, and not only because it conveniently hides what is really going on. It also really planted me more firmly in the heads of the protagonists, allowing it to also function beautifully as a cautionary tale about judging a culture based on appearances and notions from your own bias.

I ended up mourning the priest I wanted to see dead in the beginning – and I suddenly felt guilty for it.  Remember the blond-haired second-in-command of the group, the guy who butchered the hog, who you thought was so brutal and relentless? With the priest dead, it’s amazing to suddenly see the full weight and responsibility sink in as he’s forced to step into a role he had hoped he’d never have to fill. These guys don’t want to be executing people any more than anyone, but what choice do they have? They’re protecting the world from evil.

Definitely not the kind of conversation I expected to be having at the end of this movie when I picked it out. It’s great to be surprised by something so original.