They Live is an awesomely goofy sendup of classic sci-fi films, while at the same time a hilarious and heavy-handed social commentary. Craig and I loved dissecting this film on our podcast a couple years ago.

An unnamed man arrives from nowhere to a nameless big city with nothing but a sleeping bag and backpack. He quickly finds work as a construction worker and happens upon a pair of sunglasses that shows how the world really is. 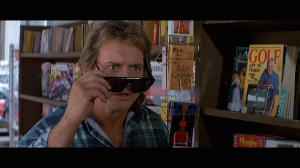 Movies like this remind you that, the more things change, the more they remain the same. It posits that the lower classes are being subdued and subjugated by aliens masquerading as yuppies and Wall Street socialites, and that all media are just distractions subliminally telling us to obey, keep quiet, and continue to reproduce.

In other words, it’s modern day America, but with aliens.

Yet make no mistake: Director John Carpenter clearly doesn’t even take his political message all that seriously. Nothing so ham-fisted bogs down this whirlwind of a story, with tongue planted firmly in-cheek from the opening to the end credits.

I mean, he cast “Rowdy” Roddy Piper in his first major film role. Roddy is handsome and built, and he spouts cheesy one-liners with all the panache of an only slightly more eloquent Arnold Schwarzenegger, plus the classic line: “I have come here to chew bubble gum and kick ass…and I’m all out of bubble gum.” This line was, incredibly, ad-libbed by Roddy himself. 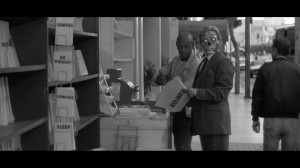 Roddy’s eventual partner Frank is played by the versatile Keith David. Together, the two form a natural duo. George “Buck” Flower makes an appearance, and Meg Foster’s piercing eyes look more alien than many of the actual aliens.

Budget restraints are apparent, yet Carpenter manages to make the most out of nothing by embracing that and draping the movie with a thick slice of hot, melted cheese. I’m thinking of such elements as the same closeup shot of machine gun fire repeatedly and liberally edited into fight sequences. And the fact that the invincible main characters can rob banks, shoot scores of cops, and draw the attention of every covert alien around them, yet walk down the city sidewalks with impunity when it’s convenient. Wearing shades. Anyone who’s lived through the 80’s will instantly recognize the multiple layers of satire at play here.

There are so many terrific-yet-corny moments I won’t mention, but be aware: The plot has more holes than a block of swiss cheese, and you’ll be asked to suspend your disbelief to almost an absurd degree to stay on the ride. Streets are empty when it’s convenient. Cops give up their full-on pursuits all too quickly. The aliens can report and communicate with wrist transmitters, but they can’t seem to organize effectively or recognize the most wanted men in the city when they stroll, underdressed, into a fancy convention. You might also be a bit turned off by Roddy’s less-than-stellar line delivery. It’s surprising how uneven John Carpenter’s output is, being the same man who made The Thing and Halloween.

Just think Big Trouble in Little China with no budget. And prepare yourself for the longest, most deliciously absurd fight scene you’ve ever seen between two people. Over a pair of sunglasses. This is what you sign up for when you cast a pro wrestler as lead. I laughed so hard… 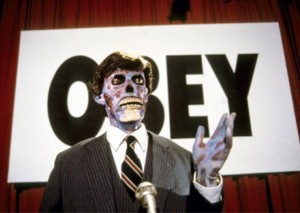 Did you notice the PKE meters from Ghostbusters?

Looking back, this film came out one year after Robocop, which was clearly an influence. Though Robocop had the bigger budget, both satires touch on similar themes of the militarization of police and a controlling power elite.

I love how the truth, when seen, is black and white. And I couldn’t help but smile at Roddy’s final middle finger to The Man, his character’s statement that a sellout life is not worth living – even if it’s the only life there is.