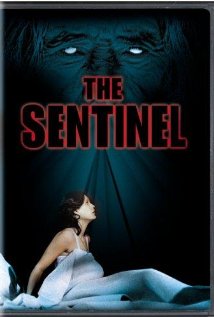 There are telltale signs that a horror movie was made in the 70s – and I’m not talking about bellbottoms, butterfly collars and extra-wide ties.

I mean the overuse of zooming instead of dollying in; a saturated film stock with noticeable grain; a musical underscore for every damn scene; casual nudity; explicit gore effects with blood as red as paint and strawberry jam; horror in the daylight; and a plot angle that involves Satan himself.

All these things I enjoy very much. If you do too, you’ll find them in spades in The Sentinel. It’s a fairly goofy outing that manages to build a sense of mystery and doom before spiraling into confusion and weirdness at the very end.

But you’ll want to watch it for the star-studded cast alone: Chris Sarandon, Burgess Meredith, Ava Gardner, John Carradine, Tom Berenger, William Hickey, Jose Ferrer, Jerry Orbach, Beverly D’Angelo (and her boobies), and a young Christopher Walken. Jeff Goldblum, who isn’t even mentioned in the opening credits, appears in a minor role as a fashion photographer. I wasn’t born until two years later, but I imagine this was a high-profile film when it hit the theaters.

There’s a refreshing economy of story in the first 15 minutes, barreling full-speed-ahead through tightly crammed character and plot information. Alison Parker is a famous model who, despite living for many years with big-shot lawyer Michael (Chris Sarandon), is nevertheless searching for an apartment of her own. Her father dies. We learn he was an adulterer who drove her to suicide as a child and that she is Catholic. She settles into an apartment amongst a grotesque menagerie of neighbors and a strange priest on the top floor who’s forever staring out the window. 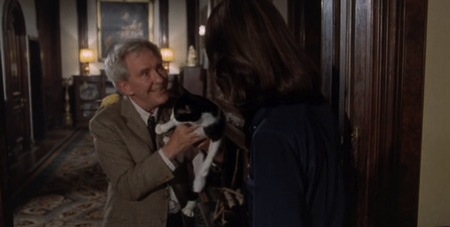 Speaking of the neighbors, you’ll see they’ve been plucked from a certain Roman Polanski film. You’ll also witness some explicit gore effects that linger just a little too long and dream sequences with naked senior citizens. Along with the fact that none of the female characters seem to be wearing a bra, the movie shows its age with its portrayal of the lesbians downstairs. It’s also quaint that Alison describes herself to a priest as an adulterer just because, we assume, she has a live-in boyfriend. Forced to occupy the field between The Exorcist and Rosemary’s Baby, director Michael Winner must try especially hard to deliver shocking content. 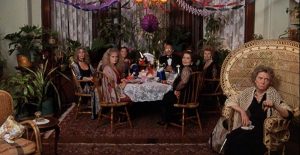 Yet I can’t help but feel that beneath its campy exterior and shock tactics are layers of meaning to be discovered by the more observant viewer. This usually happens with movies based on novels. It’s only hinted at that Michael is an amateur magician – some flourishes with a silk in an earlier scene and the antique magic posters that decorate his apartment. He comes across as caring and loving. But considering the fates of his previous wives, he’s not quite the ideal mate for a person of Alison’s traumatic background.

Alison’s ultimate choice of profession is an interesting feminist response to her father’s improprieties, and she’s not completely confident in her relationships with men. This is tempered by feelings of guilt and a desire to avoid her mother’s plight that manifests itself in visions of her father and violent fantasies of stabbing and cutting him up. Her turning from – then retreating back to – Catholicism leads to an ironic fate.

Anyway, my point is there’s plenty of symbolism and subtext here for a more thorough analysis than I’m prepared to give.

Another hallmark of 70’s horror is the bleak ending where things do not resolve happily ever after. I personally appreciate this style of storytelling, which also makes for a great Halloween movie.  In a way, Alison comes full-circle. The more you reflect on it, the more satisfying the ending really is.

As Netflix describes it, this film is undeniably Universal’s answer to The Exorcist – a valiant attempt at something more profound and shocking, hidden behind a cheesy plot that aims for chills but somehow lands in camp. But as long as you keep it planted firmly in its time, it’s a solid horror flick that’s worth watching. It probably deserves more thought and credit than most folks are likely to give it.

Now that you’ve seen it…

I’m still trying to figure out why Michael goes so far as to kill the priest upstairs. The move seems rather impulsive and, although we get the feeling that he is a powerful man, he never comes across as evil or mean enough for that. From what I can tell, it only serves two functions: 1) to remove him from the equation so that Alison is free to become the new Sentinel with no loose ends, and 2) to provide that all-important explanation of exactly what is happening in the end.

Indeed, without his thorough explanation that the house is the gateway to Hell, guarded over by a person who has to be replaced by someone who doesn’t kill themselves first, I wonder how we would ever have figured all that out on our own. It’s a lazy way to convey a story to an audience.

Is the real estate agent the luring temptress, tasked with bringing in someone weak enough to overturn the current Sentinel and kill themselves, finally unleashing the forces of hell upon the earth? Is her foil the mysterious Catholic priest who shows up at just the right times? I wonder if she represents an Angel of Darkness, while the priest is Gabriel – both free to roam outside the gates to influence humans, unlike the others.

The ending seemed to me to be an homage to Universal’s earlier and most controversial horror film, Tod Browning’s Freaks. I found myself wondering how many of the denizens of hell were made up and which ones looked like that in real-life. Judged against the makeup effects earlier in the movie, I imagine there were more of the latter than the former.