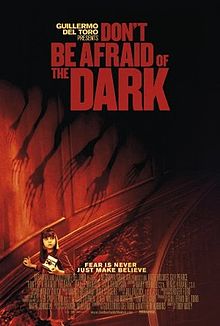 Poor Sally. All the adults in her life fail her. Her mother ships her off to live with her father without telling her it’s a permanent move. Her father is preoccupied with getting his restored English country manor listed on the cover of Architecture Digest. And while his father’s girlfriend tries to reach out to her, she deserts her at the most inconvenient moments.

It doesn’t take Sally long to explore the old manor and discover a hidden basement with spooky voices coming through a  well-sealed grate. Displaying the childlike curiosity in the face of spooky happenings that only exists in the movies, she unleashes a horde of ancient creatures from deep below the earth.

This loose remake of the 1973 original, produced by Guillermo Del Toro, also bears some similarities to his most famous previous horror film, Pan’s Labyrinth. A young child helpless in an unforgiving adult world escapes into fantasy and finds more than she bargained for. Only this world is not metaphorical at all.

The cinematography is wonderful as the camera sweeps through the fantastic sets inside and out. For a movie that depends so much on the play between light and darkness, a mood is established early on and carries the action through shadows, beams of bright light, and the spaces between. The pacing of the plot is good, characters well-drawn, and the tension slowly builds to a genuine dread early on. 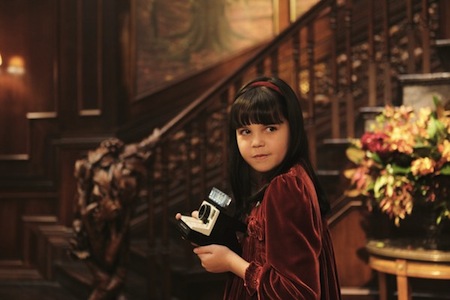 But once the mystery reveals itself and focus turns to the creatures, it becomes less suspenseful and more like a not-so-funny Gremlins. Weta Digital builds fantastic creatures, but I think it worked better when they stayed in the shadows and revealed themselves only through glimpses, glowing eyes and whispers.

Performances by Guy Pierce and Katie Holmes are about what you’d expect. Bailee Madison deserves special recognition for moving the child-in-peril through a plausible and believable series of emotions. It’s easy to put yourself in this kid’s shoes, as we all ventured down those roads at that age.

Unfortunately, the plot has major problems – so glaring as to be distracting. An unexpected connection to a childhood fairy tale materializes. It’s an interesting twist but ultimately doesn’t make a lot of sense. And like many movies of its ilk, you’ll continually wonder why people aren’t doing the obvious thing – using their cell phones to call for help, exploring when they should be running, staying when they should be going, and just generally sticking together when the heat is on.

The standard cliches are trotted out as well. Everyone blames the child’s overactive imagination against all evidence. A psychiatrist is called in for a session in which the surprisingly artistic child makes creepy drawings. An old man knows exactly what’s going on but hides it behind cryptic words.  Then there’s the obligatory protagonist-does-some-sleuthing-at-the-public-library sequence, where she happens to find the one librarian who, of all the topics in the world, is obsessed over the very historical events that help explain this situation.

In all, the movie is well-made and acted, and a fun ride for the Halloween season with some genuine scares. The ending is also probably not what you’d expect. I can’t be too hard on it; I’ve seen much worse.

Let’s take a moment to discuss the many incoherencies and just plain dumb things that kept me from getting lost in this world.

It becomes established at some point that the creatures are afraid of light. The creatures even have to take out Sally’s little bedside lamp, which barely functions as a nightlight, before they’re able to terrorize her while she sleeps. And cutting the power to the house in the final act finally gives them the cover they need for the no-hold-barred attack.

Yet the lights only have an effect if it is convenient to the particular scene. Shining a flashlight in their eyes does little to stop them. The intense (and endless) flashbulbs from Sally’s camera don’t do much to repel the creatures in the library room scene. And during the dinner party, the creatures run willy nilly across the floor, hiding in the flower pot, getting under tables and scurrying across the foyer in full light.

The script implies a connection to the tooth fairy legend, and good on them for not spelling it outright. But if the creatures eat teeth and bones, why is a bowl of teeth allowed to sit untouched in the furnace for decades? In case you’ll argue that they shun adult molars, why do they take the old adult tooth from under Sally’s pillow – and why would they bother replacing it with a coin? Adults seem to satisfy their hunger just fine, as both the opening and ending sequences make clear. In that case, why not just kill the old caretaker outright, pull him down into the furnace when they had the chance, and be satiated for another hundred or so years? Speaking of that scene, why do they all scatter when the maid looks in?

And for heaven’s sake, when Katie Holmes visits the caretaker in the hospital, instead of being straight with her about what happened, he recites the Dewey decimal system – forcing her to go to the library and find the drawings and piece things together for herself. By this point, what does he have to lose by being direct with her?

When Sally has her big fight with all the monsters in the library at the home, she crushes one with the bookshelf, and its arm falls off. The camera ZOOMS IN on the severed arm. I expected this to be significant. Yet when her dad and all the other guests rush in, nobody notices the squashed body or the arm. Why doesn’t Sally point to it and say, “Look Daddy, I have proof”? Where did it go later, when they were presumably back cleaning up the room? Was there a deleted scene we don’t know about?

But my biggest beef resides with that crazy Polaroid camera. When Katie Holmes first appeared with it, I assumed we were watching a period piece – judging from the flashbulbs, maybe sometime mid-to-late 80’s – until Guy Pierce turned around and handed his cell phone to Sally. So clearly we’re in the present.

Why would an interior designer in this day and age be carrying around a Polaroid camera with a FLASH BAR to take photos? Wouldn’t she have upgraded to a digital camera by now to save money? Or assuming she just liked the aesthetic, still – why use a model that requires disposable flash bars?

Anyone who’s grown up with that technology knows that you only get 5 flashes to each side, which you need to replace when depleted. In the library fight scene, Sally flails about the room taking flash after flash, never once flipping the bar around or reloading it. In fact, not only do the bulbs fail to go off in order, but the same bulbs go off more than once.

Sure, it may seem like a small thing, but in order to shoot that scene the filmmakers would have well-known the limitations they were up against. This was the point when I stopped giving any credit to the writers and just waited for the plot to resolve itself so I could go to bed.