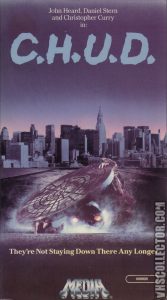 The image above on video covers and posters at the rental store haunted me as a kid. I fantasized about it constantly and I’ve been dying to see it ever since. The film is so notorious that references to “chuds” surface in pop-culture from time to time.

I came to C.H.U.D. with high hopes. I left with major disappointments.

So the plot involves Cannibalistic Humanoid Underground Dwellers and weaves together a few different storylines. George Cooper (John Heard – the dad from Home Alone) is a photographer with a model girlfriend who did an award-winning photo essay about derelicts who live in the NYC sewers. “The Reverend”  (Daniel Stern – one of the burglars from Home Alone) plays a guy who runs a “soup kitchen” (we’ll use that term lightly) to feed said derelicts, preoccupied with the fact that they’ve been disappearing. And Murphy is a cop tormented by his missing wife and receiving reports of strange attacks. 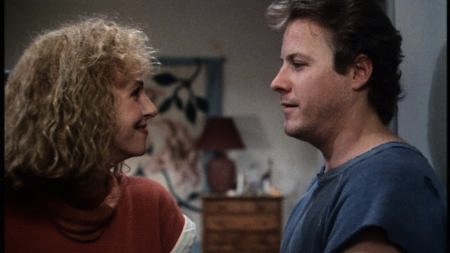 The setup makes the plot sound far more sophisticated than it actually is. While exploring the sewers in answers to these questions, we learn that radioactive waste is transforming the homeless underground into crazy-ass monsters with glowing eyes, sharp teeth, killer claws and awesome stretchable necks that spurt green blood when cut. In my book, that’s a pretty dramatic transformation. On the plus side, it’s only a matter of time before a gang of ninja turtles surface to join the fight.

Our cast of characters goes about their respective days, talk to each other and ask a lot of questions for more than 30 minutes before an all-too-brief monster attack. This leads to  another 30 minutes of intense hand-wringing before another attack. These C.H.U.D.S know how to bide their time and respect the budget they have to work within. They may want to talk with their union though, as I think their total screen time comes in well under 5 minutes.

Considering the players, most of the acting is several steps above your average B-grade horror flick, though some of it is still pretty abysmal. As far as class depictions go, The Warriors is to street gangs as C.H.U.D. is to the homeless – you can them apart by their sweaty, dirt-smeared faces ala the chimney sweeps from Mary Poppins. The creature effects were terrific – I just wish we could’ve seen more of them.

I don’t demand much believability from my horror films, but when you’re stuck on a ride watching people talk with each other and make lame discoveries for 90 minutes, you need some fairly high stakes and real emotional drama to hold onto. The things that motivate and challenge these guys (and they’re all guys) are 100% low-budget Hollywood. For example, I’m sure the clandestine government goons secretly performing tests in the sewers are not going to be leaving a trail of boots and geiger counters behind them for others to find. And I’m sure their chief-in-command would not be so easily bullied by a local cop and a crazy bum. And he’d probably know how to operate a firearm or call for backup. I could go on like this for a while.

A highlight of the film was the surprise appearance of a younger, skinnier John Goodman as a cop in a diner.

C.H.U.D. is a boring movie with an awesome monster, and I’ll bet it read much better on paper. If ever there were a film that Hollywood needed a reboot, this is it. I’ll write the script. Just give me a call. 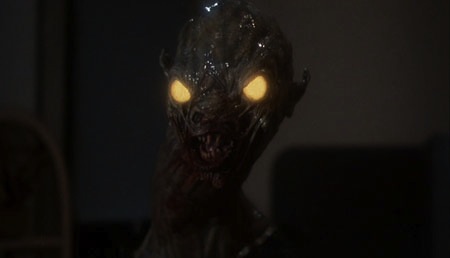 What the hell is going on in that scene when Kim stabs the coat hanger into her shower drain and fountains of blood spurt out? Just what exactly is she hitting with four inches of wire down that tiny pipe in the second story of her apartment building? And in the next scene she’s back in the living room arranging flowers. I guess she just shrugged her shoulders and cleaned it all up without a second thought. All in a day’s work, eh?

How is Daniel Stern suddenly omigosh TRAPPED in the entire NYC sewer system because some guy wearing shades put a wimpy padlock on the one access door he used? He smugly saunters away with his “I’m so cool” Ray-Bans to collect his paycheck. Shouldn’t he be running down the street to hold down the next manhole cover or something?

So the big plan to deal with this menace is to seal off the entire sewer system and pump it with gas. Does that even remotely sound like an acceptable idea? How long would it take to seal all those entrances, considering every apartment building apparently has a trapdoor in the basement leading straight into the sewer? How much gas would that take and where would it come from? Wouldn’t the 200+ gas trucks rolling into town start to clue people in to something suspicious?

Even before the gas pumping begins, there’s the wisdom of sending your men into a tunnel with flame-throwers, knowing that the last CHUD you pulled out of there was confirmed dead from a gas leak. When they finally do encounter an unknown figure moving ahead of them, the bad guy instructs them to blindly blast their flamethrowers at it because, “I don’t care what it is, nothing could be living down there.” Uh, anybody remember that prize-winning photo essay they keep bringing up?

Honestly, judging from the amount of time they spend wandering the most well-lit sewer system in North America without running into anything, it doesn’t even seem like the C.H.U.D.s are that big of a menace anyway. There are probably five or six of them down there tops who just should’ve laid low for a while, eating the alligators and breeding a few more before planning a bigger attack.

Finally, The Reverend’s whole “soup kitchen” thing seems pretty sketchy to me. As far as I can tell this is a personal enterprise, presumably for some kind of profit. Not sure what kind of dinner involves heating some water on a stove, a half-chopped carrot and a jar of pickles. I admire his good nature, but somebody needs to send the health department in there fast.