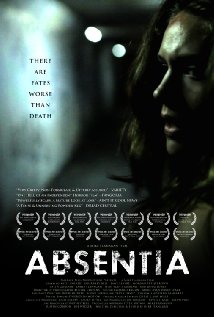 Craig originally recommended this gem to me. Director Mike Flanagan raised the money for principal photography for Absentia on Kickstarter and it’s swept up more than 20 well-deserved awards at film festivals across the nation a few years ago.

Tricia is pregnant and finally ready to declare her missing husband of 7 years dead in absentia. She’s not dealing with it well, and her younger sister Callie, a recovering drug addict, moves in to help her pack it up and move on. That’s when things take some turns for the strange. Is there something to the images that haunt Tricia or is it the product of her troubled conscience?

Don’t let the DVD covers you see online fool you – this is not your Drag Me To Hell horror experience. Much like Tricia’s meditations, watching this film is more Zen. The plot moved slowly but deliberately, and I became engrossed by the complexities of a woman coping with her missing husband and her guilt at finally giving up. As you try to piece together what might be happening, the plot organically unfolds in unexpected and unpredictable directions. At one point, I stopped guessing and just let my mind just soak in the images and sounds. In short, the story carried me away.

We witness a variety of coping mechanisms at work. There’s the Buddhist meditation. The Christian prayer. The psychiatric treatment. The bonds to be leaned on in family. The arms of a romantic tryst. All of these weave beautifully to produce a complex and understated portrait of people in trauma. The action is wisely contained to only a handful of characters and they are fully-formed real people. The manner in which they act and respond is entirely plausible. In short, the writing is great.

I was also not expecting the acting in this film to be so incredible. Not many actors can pull off such drama in such long, lingering shots. Where did Flanagan find these girls?

Oh – I guess he’s married to one of them. Well, some moments were so intimate and convincing that it felt like I was watching someone’s private home videos. The acting is so good that it never draws attention to itself.

My only beef is that I found the camerawork mildly irritating at times. In most of the exteriors, what should have been static shots often had an annoying wiggle to it that betrayed a light, handheld video camera in an unsteady hand. Aside from the dizzying effect, the end result is an artifacting effect from the compression where some parts of the picture seem to stay in place while other parts wiggle around it. It’s subtle and hard to describe, but if you’ve spent enough time watching digital video you’ll know what I mean. 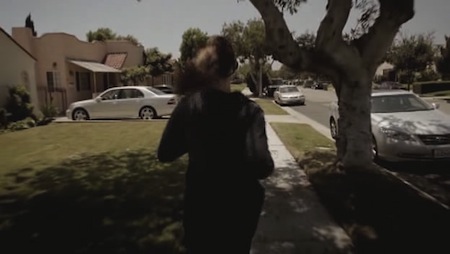 And the vertigo is distracting enough. When you’re editing on a small computer monitor, it’s hard to realize how little bit of wiggle becomes magnified on a giant screen, where the edges are long and dark. One could argue this was a conscious decision, but I don’t buy it here – not in this movie, not in these shots. There’s no artistic reason why every 3 second exterior establishing shot of the a building bounces around ever so slightly. I blame laziness. Just pull out the damned tripod.

That’s two paragraphs too many to devote to such a triviality, because the rest of the cinematography is quite beautiful and carefully – CAREFULLY – crafted for maximum suspense. Flanagan channels Hitchcock. No cheap shots or orchestral hits. He just knows how to take his time yet keep things from getting boring or stagnant. Nobody’s in a rush and, as we grow impatient, the tension slowly creeps in. It’s effective and it exceeded my expectations.

The sound design really shines. At times, there is nothing but the sounds of the outdoors or the quiet of a house. There’s very little music, but instead an ethereal droning that creeps in at all the appropriate moments. I can’t say too much more, except that you hardly find such understated care given to sound in a movie like this.

As I read back over this review, it sounds like I’m gushing over this film. And I guess I am. It’s not going to win best film of the year, but it’s a strong contender. It’s not the most intensely terrifying horror film you’ve ever seen, but it is highly original. For the full running time I couldn’t look away or turn it off, and I left thoroughly satisfied. What more could you ask for?

I love the way they used flashback sequences to illustrate what a person said or is thinking. For example, when Callie asks Tricia what she thinks really happened when Daniel is dragged away the second time. She envisions an entirely plausible scenario. Or when Callie is relating to the police how Tricia was dragged away. And it’s particularly effective at the end, when Detective Mallory is imagining the various ways the two women could’ve disappeared. This is economic storytelling and much more interesting for the audience than hearing a person speak words.

What a creepy neighborhood. I would love to know what the police department’s nickname for it was. I’d like to know if there is more than one creature and the terms of its “trades” in more detail. The film wisely does not answer these questions.

After a little research, it looks like the whole film was shot with this camera. 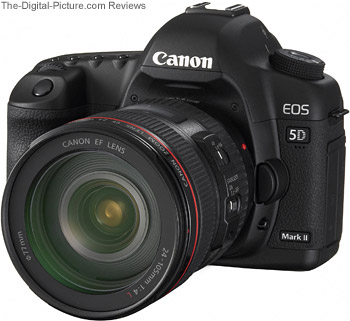 What a world we live in.