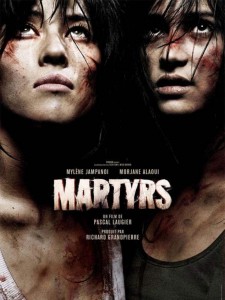 I wasn’t exactly looking for something to put me in a bad mood for the rest of the night, but Martyrs did the trick.

Of course that was the trick it was going for, to be fair. This tale about two childhood friends seeking revenge on their former abusers starts with a whiff of the supernatural and navigates a few interesting turns for the first 45 minutes or so – before taking a complete 180 into some very strange and difficult territory.

This 2008 French film remains extremely polarizing, as it was when it first opened at the Cannes film festival and caused a ratings stir due to its heretofore unseen levels of violence and queasiness. It’s no surprise the MPAA rated this one NC-17 in the U.S. 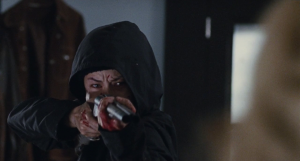 It’s a question I ask myself repeatedly when I run across these movies. At one time, as a person who’s more-or-less seen it all many times over, I felt a kind of catharsis watching films that could succeed at making me look away from the screen. Nowadays, I look more at my watch. I’m sorry, but I’m just losing patience for overly nihilistic narratives like this one, particularly as it starts swimming in the waters of pretention – and this, I suppose, is where others’ opinions begin to diverge from mine. 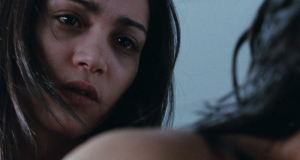 Is there a place for films like Martyrs? Absolutely. We need well-made films that take risks and aspire to more than superheroes saving the world or people in hot pursuit or escape. The whole point is that you’re not supposed to enjoy it. In that, it’s very French indeed, and it’s often lumped in with the New French Extremity movement, of which I’ve only seen Haute Tension (which I felt was a much better film than this).

There’s no question it lies on a higher artistic plane than, say, Last House on the Left or I Spit On Your Grave. Then again, so was A Serbian Film; which I staunchly defend, so it’s complicated. Much like that film, character development and acting is solid, cinematography and makeup effects fantastic, and it does aspire to point to feelings and emotions beyond disgust that are within the grasp of its audience.

But does it meet its target? I imagine its overwrought spiritual themes will strike a chord with those who like such things dealt by a heavy hand. Me, not so much. After enduring 90 excruciatingly painful minutes of nastiness and brutality, the closest I came to a transcendent experience was a hot shower. 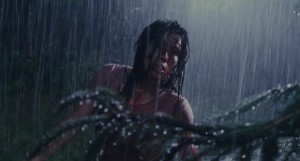 The problem for me is this isn’t exactly a new idea, and I don’t need this kind of preaching, and c’mon now, can’t you veil all this with a little more artifice and entertainment? That’s what skilled artists do.

I reviewed Cannibal Holocaust last year, a much lower budget exploitation film with the same basic message, only slightly less heavy-handed by the end, and it manages to be relatively enjoyable to watch (all things considered). I’m not convinced you have to take it to this level, which seems more exploitive to me than another 12 classic exploitation films I can rattle off the top of my head.

One good thing I can say about its approach to violence is that it is realistic and does not glorify it like pretty much every Hollywood movie ever has done. However, while it avoids making the violence fun, it comes dangerously close to making it appear beautiful in the end.

In art, I believe the argument that one of the most effective ways to get an audience to face uncomfortable truths is to make them truly uncomfortable. While this accomplishes the latter without a doubt, I worry that most of that work here unravels when it stops entertaining and begins preaching.