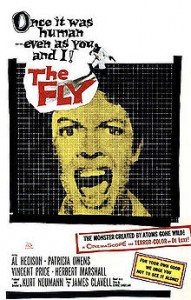 There’s a 1986 version of The Fly starring Jeff Goldblum and Geena Davis that you would remember if you saw it. It features some fantastic and disgusting body horror and special effects (of course – it’s directed by David Cronenberg), and also happens to be one of the most heartbreaking movies you’ll ever watch. We covered it in our podcast earlier this year, and I think it’s one of our best episodes.

This is not that version, but it’s no less heartbreaking. The beautiful – but not TOO beautiful – Patricia Owens stars as Helene Delambre, devoted wife to scientist Andre Delambre. The film begins with the police investigating her motive in the murder of her husband by mechanical press, which brings in brother and business partner François, played by the inimitable Vincent Price. 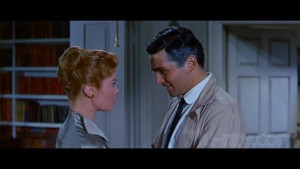 The film revolves around the mystery of why in the world Patricia, a calm and loving family woman, would so matter-of-factly admit to killing her husband. We experience the story in flashback as she relates her fantastic tale to Andre and Inspector Charas.

Will she be charged or not? The skepticism with which they treat her guilt seems quaint today, as we’ve seen enough evening news to know that murderer next door seems to be the person you’d least expect. But director Kurt Neumann does such a fantastic job of setting up and dwelling on the unquestionable love between husband and wife that the mystery remains solid. 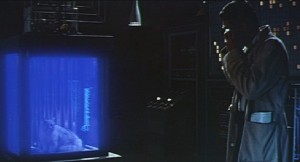 Much of the power of The Fly comes from its pedestrian storytelling. It’s probably a happy accident, but the bright Technicolor Cinemascope production, the 50’s-era setting, and inclusion of A-list actor Vincent Price up the ante because the tragedy contrasts so starkly against what otherwise runs like an episode of Leave It To Beaver. The Delambre’s domestic life is so perfect and happy and loving that only a sadist would enjoy watching it fall apart so suddenly.

Just think: This story COULD have gotten the same low-budget, black and white treatment as so many other sci-fi flicks of the time. Yet here it stands, a highly-watchable and satisfying film nearly 60 years later. And as a bonus you get to watch Vincent Price for a while. Two big thumbs up.

Though the plot drags at times, it unfolds properly and methodically. It doesn’t deserve its somewhat happy ending, though. In that, it’s a product of its time, as the ending of the original short story (as published in Playboy the year before) was much darker.

It’s a bit unbelievable that a scientist/inventor – especially one as level-headed as Andre – would give up so easily, not include others in his research or reach out to them for assistance, or destroy his valuable work to that tired old “man was not meant to dabble in this” chestnut that is, truly, another product of its time.

Nonetheless, I still found this version emotionally challenging. Seeing the cat get it was bad enough. By not including any footage of Andre’s ill-fated transformation, the suddenness of it hit me with the same suddenness that it hits Helene. And because you know Andre’s demise at the outset, you feel even deeper the tragedy of the spouse who will never get to give a proper goodbye from the moment he first slips that typed piece of paper under the door. It’s a very effective use of the flashback device. When Andre writes his final plea on the chalkboard….man…

I loved almost everything about this movie: the acting, the setting, the concept, the makeup, and of course the fact that I could watch it with my own squeamish wife.