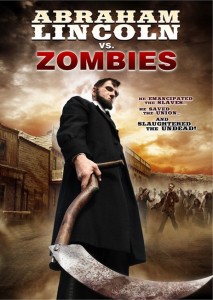 The news lately feels a lot like a horror show – only much less fun. After drowning deeper and deeper in political turmoil these last few days, I desperately needed something uplifting to pull me out of the star-spangled muck and restore my faith in government, democracy, and the good ol’ U.S.A.

I needed Abraham Lincoln vs. Zombies. 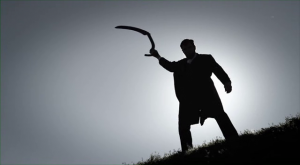 The Asylum always delivers in its own special way. This the premiere film production company churning out low-budget schlock for the straight-to-DVD market, usually taking its concepts from whatever movie is currently a hit in the theaters. And sharks. It may not be high art, but their movies get seen. They make money. And there’s nothing more American than that.

As you probably guessed, you’ll find a lot of Americana in The Asylum’s take on the bigger budget Abraham Lincoln: Vampire Hunter.

In the opening flashback, we learn that young boy Lincoln was the sole survivor of a zombie outbreak that decimated his town and family, forcing him to decapitate his own infected mother with the swing of a switchblade scythe. He apparently found the tool so handy for the job that he hung onto it for later use. 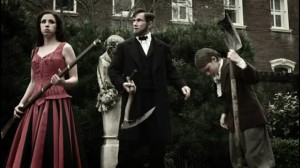 In the present, Lincoln is dealing with new horrors as the civil war wages on. In a remarkably good White House set, he’s preparing to give the Gettysburg Address as his advisor rushes in with bad news: Operation Big Shanty – a covert operation to take Fort Polasky for the Union – ran into some complications. Most of Captain Eckert’s men are dead, and Eckert himself seems sick and is rambling about walking dead men.

“Walking dead men? Are they union or confederacy?”
“Both,” he says. “Or neither. I don’t know.”

Thus setting the tone for the kind of dialogue you can expect as the movie plods along.

Lincoln decides only he, himself, has the experience required to deal with this threat. So he enlists the help of the newly-formed Secret Service, among whom are a former slave, John Wilkenson (hint hint), and a handful of other disposable characters. Their strategy for retaking the fort from the Confederacy is simple: Dressed in our Sunday best, we shall march along the train tracks, straight to yonder fort, and bang on the front door until it gives way. 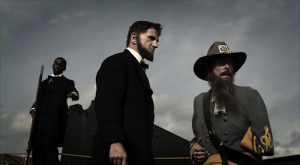 In the middle of a gun battle with Stonewall Jackson and the confederate holdouts, they learn there’s a much bigger force to contend with outside the fort’s gates.

Many new zombie movies try to put a new spin on the genre. 28 Days Later gave us the running zombie. The Crazies gave us intelligent zombies. Diary of the Dead gave us motion sickness.

This one is no different, as Abraham Lincoln vs. Zombies gives us: The Sleeping Zombie.

These zombies spend most of their day sleeping while standing up – especially when it’s convenient to the plot – allowing you to safely walk past through the whole horde as close and as clumsily as you want. Just don’t shoot a gun or let a rooster crow, or they’ll suddenly wake up and grab for your brains. 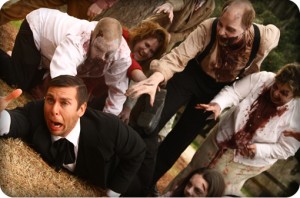 I won’t spoil the rest of the plot, but I’ll at least tantalize you with a small list of things in store should you be bored enough to watch this film:

I can’t recommend this as a particularly scary or well-plotted film. The action sequences aren’t thrilling. Its low budget shows in the scenery, the framing of the shots, and the occasional CGI wide shots of a historic landscape.

But I did enjoy watching the writers attempt to tie nearly every significant event and/or person in Abraham Lincoln’s biography to his zombie adventures. There are many groaners, which is why this is one of those movies best watched with friends. I propose a party game: Count how many times a phrase from the Gettysburg Address pops up in conversation. 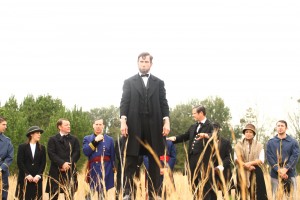 I must give major props to Bill Oberst, Jr. for a surprisingly respectable portrayal of everyone’s favorite president. Though it’s hard to rise above the lines he was given, his attempts to do so were what kept me watching. At times, he even seemed to be channeling Daniel Day-Lewis’s Oscar-winning performance, though this film came out months before Spielberg’s Lincoln.

I was also charmed by each of the no-less-than-five variations of this exchange between Lincoln and the child Teddy Roosevelt:

“Teddy, I want you to stay here while we go fight.”
“No! I want to go with you!”
(Lincoln slowly grins, winks at Teddy)
“Ok, Teddy. You’re coming with us.”

I only wish today’s Republicans could be such amiable negotiators. 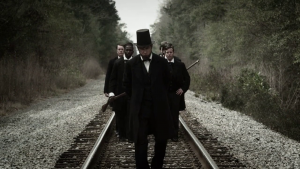 My favorite scene was the long, slow pan across the faces of the company, giving each other knowing looks and staring together pensively at nothing in particular while the music builds. Then Lincoln just kind of shrugs and gives a look as to say, “Well, whatever, y’all ready?” to which they awkwardly turn around and just saunter away.