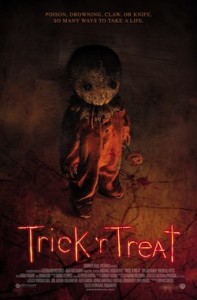 Ever discovered a new movie and asked yourself, “Where have you been all my life?” I’ll freely admit I was giddy with excitement when I discovered this gem.

It’s hard for me to believe that Trick R Treat is 10 years old. Produced by Bryan Singer, this horror anthology film has a storied past. Shelved for two years and eventually released direct to DVD – a borderline criminal move – it rose to cult status in just a few short years, thanks to social media and a series of festival screenings.

IMHO, this masterpiece deserves every bit of acclaim it has received. Beautifully shot with terrific practical effects, it’s not quite your typical horror anthology film. 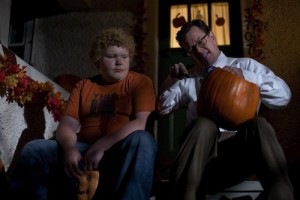 Horror and comedy are the only two genres I’m aware of that make movies out of stringing short tales together. In comedy, you may be familiar with films like Kentucky Fried Movie, Amazon Women on the Moon, or Monty Python’s The Meaning of Life.

There seem to be way more horror anthology films for some reason, and they relentlessly follow a certain formula. Exemplified by films like Cat’s Eye, Tales from the Crypt, Creepshow, Tales from the Darkside, Tales from the Hood, et al, you basically have a series of short stories with an ironic twist at the end, bookended by a wraparound story that ties them together thematically. 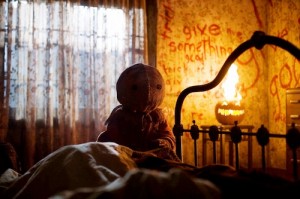 In Tales from the Crypt, it’s a group of tourists trapped in an underground chamber by the Cryptkeeper, who reveals their backstories one by one. Tales from the Darkside is a series of tales told to a witch by her young captor as a stalling tactic. You get the idea. Usually the wraparound story itself finishes the film with an ironic O’Henry-type ending, giving the film cohesion and a fitting finale.

Trick R Treat instead weaves four different stories together at once, which I’m not going to spoil for you here. Part of the fun in watching is noticing characters from previous stories showing up in new stories and discovering how the narratives will overlap. They are not necessarily told in sequence.

All the action here takes place in a single town on a single Halloween night, dripping with delicious holiday atmosphere. The budget is high, acting terrific, with lots of good old-fashioned practical effects.Writer-director Michael Dougherty brings us some fresh and unpredictable narratives – another rarity for this genre. Much of the fun of these movies is knowing that the evil characters will get their comeuppance in the end, usually in a fitting and grisly way. The dead know revenge like no other. 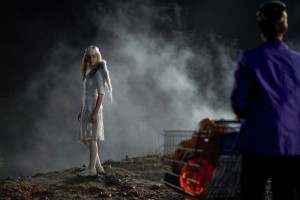 To paraphrase another critic, I can’t imagine a horror fan not falling head-over-heels in love with Trick R Treat. It encapsulates everything that’s fun and festive about October 31st, and it holds a spot on my regular Halloween Mood Watch List – right after Creepshow and before It’s The Great Pumpkin, Charlie Brown.

Craig and I discussed this film two years ago on our podcast. Listen to the episode for a more in-depth look and synopsis of the film! 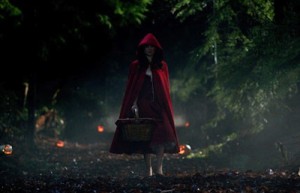